Madeira and its great laurel forest

Listed as a UNESCO World Heritage Site, Madeira's laurel forest used to cover a large area of the island. However, when the island was discovered and colonized in the 15th century, numerous deliberate fires to clear the island reduced it, and this forest is found mainly in the north and west of the island. Today, the laurel forest occupies about 20% of the island, between 300 and 1300 m altitude, in the mountains.

Millions of years ago, there were many laurel forests in Southern Europe. The climate having changed somewhat in the meantime, Madeira (or also the Azores) is now the place to be and that's what makes it so special: an area of just over 20,000 hectares to discover exceptional flora and fauna in a humid subtropical climate. There are several spellings to define these enchanting forests: laurisilva forest, lauriferous, laurel forest...

Recognised as a World Heritage Site by UNESCO since 1999 and as a Natural Heritage Site of Humanity, the great laurel forest is also protected by the Madeira Natural Park since 1982.

The strange forest is a wonder for the eyes, there are many species of plants, and the water so present in Madeira has made the flora of the island extremely rich, dense. The trees are more than a hundred years old, adorned with lichen, mosses and ferns. The biological diversity is considerable and it is a place to visit with humility. Very often, it is immersed in fog and mist, adding a fairy-tale atmosphere. However, it is just as breathtaking in sunlight.

How to discover the primary forest during your stay?

There are several places you can visit if you want to discover one of the island's laurel forests: the Fanal forest, further east the Queimada park, or the Ribeiro Frio natural park. There are many possibilities, but the best way to discover the primary forest is on foot, notably by walking along levadas or veredas, and this allows you to respect the environment. Discovering the laurisilva forest is really special and you should absolutely go there: it is one of the most beautiful natural treasures of the island. 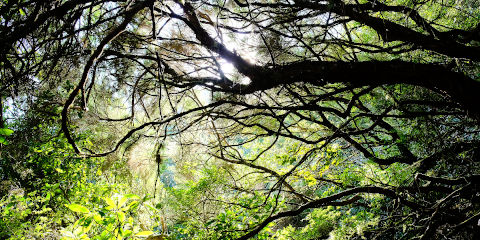 See the 1 others Laurel Forest